LIME CYCLE (2022) Wanting to pay heed to the alchemical imperative solve et coagula (dissolve and coagulate) I did an experiment involving the so-called lime cycle, in which CO2 is burned out of calcium carbonate, only to be slowly taken back up as the lime cures (normally in a plaster or mortar). I selected a piece of the grey limestone which commonly surfaces in Cannon county, Tennessee. After extracting the rock (measuring 5 gallons volumetrically) from the top soil I broke it into smaller pieces. The pieces I then placed inside a small kiln which I built also from locally sourced limestone as well as clay. After the burn, I slaked the resulting quicklime and cast the white lime slurry back into the indentation left by the original stone. In this manner, a sublimated version of the original stone came into being. Filmed by Emily C. Thomas.

BASALT (2017 — 2018) A series of collages from photographs of individual basalt rocks on the sea dyke of Zeeuws-Vlaanderen, the Netherlands. In part prefiguring "Salt", I subjected the masonry of the dyke to a process of photographic deconstruction and digital recombination. My concern was with the dissolution of single-point perspective, inspired by the collages by David Hockney. The work on the photograph measures 49X43 cm. Color print behind laser-cut passe-partout. The work was part of the group exhibition Art of the South, Crosstown Arts, Memphis, Tennessee, 2018.

SHEW STONES (2018 — ) With Emily C. Thomas. One of the largest deposits of obsidian (volcanic glass) is located in the high desert near Burns, Oregon. We worked with a local lapidary to produce a series of obsidian "shew stones", after the divinatory devices used by Renaissance occultists like John Dee. We shaped the highly polished objects like smartphones and tablets, in order to raise questions regarding the effects that digital devices may have on our innate intuitive faculties. Is the fact that most people spend a good deal of time connected to the world wide web beneficial or detrimental to the cultivation of such faculties? The Shew Stones will be used in various forms of social practice, the first iteration of which took place in 2020 as part of Bridging the Distance, an initiative by UrbanArtsCommission, Memphis, Tennessee.

INVERTED BIRD BLIND (2016 — 2017) Yellow Bird is a 175 acre property in rural Tennessee, designated by its owner David Wood as a garden for artistic experimentation. In 2016 and 2017 I salvaged the timber frame of an old shed to create Inverted Bird Blind, a permanent installation. In the ordinary bird blind, views are directed from the inside out, as the bird watcher hides in anticipation of avian presence. In Inverted Bird Blind, views are directed from the outside in, as the public takes note of painted sketches of local bird species on the interior walls. Inverted Bird Blind can be described as an awareness-enhancing machine. In a small way, the project reiterates Plato's cave: after looking inward for a few moments, taking note of the "shadows" on the inside of the blind, the viewer turns around and perceives the landscape with a renewed sense of curiosity. In 2022 I returned to Yellow Bird with my family and kept a bird diary for the duration of our two-month stay.

VIRGO RISING (2016) With Emily C. Thomas. For an event marking the Fall equinox at Yellow Bird, Cannon county, Tennessee, we made an engraving in a slab of limestone, depicting the constellations at the moment of sunrise on the Fall equinox in the Age of Pisces. This permanent feature was accompanied by a 1300-foot line of solar lights intersecting the rolling hills, oriented due east—west (the exact points of sunrise and sunset on the equinox.)

FIELD LINES (2016) The 2016 graduation exhibition of Sandberg Institute took place in Aldo van Eyck's orphanage. My project consisted of a hypothetical re-alignment of the floor plan to the magnetic north pole, a cosmic embedding of the building. I marked the "corrected" floor plan on the ground, inside and outside, using blue adhesive tape and chalk spray.

FALCON FLIGHT (2016) The Zuidas high-rise quarter in Amsterdam hosts several bird species which are at home in an alpine setting. The species with the most popular appeal is the peregrine falcon. With help of a grant from the City of Amsterdam, Stadsdeel Zuid, I realised a public art project named "Mount Zuidas", consisting of two distinct elements: "Falcon Flight" and "Probiotics for Public Space", in cooperation with VU Hortus Botanicus and TAAK. "Falcon Flight" was made with the help of independent British falcon researcher Richard Sale. A flight path recorded with a gps-device strapped to a captive peregrine was translated into a virtual reality experience. Participants were wearing a falcon mask over the virtual reality goggles, referring to the therianthropic motifs associated with shamanic practice. 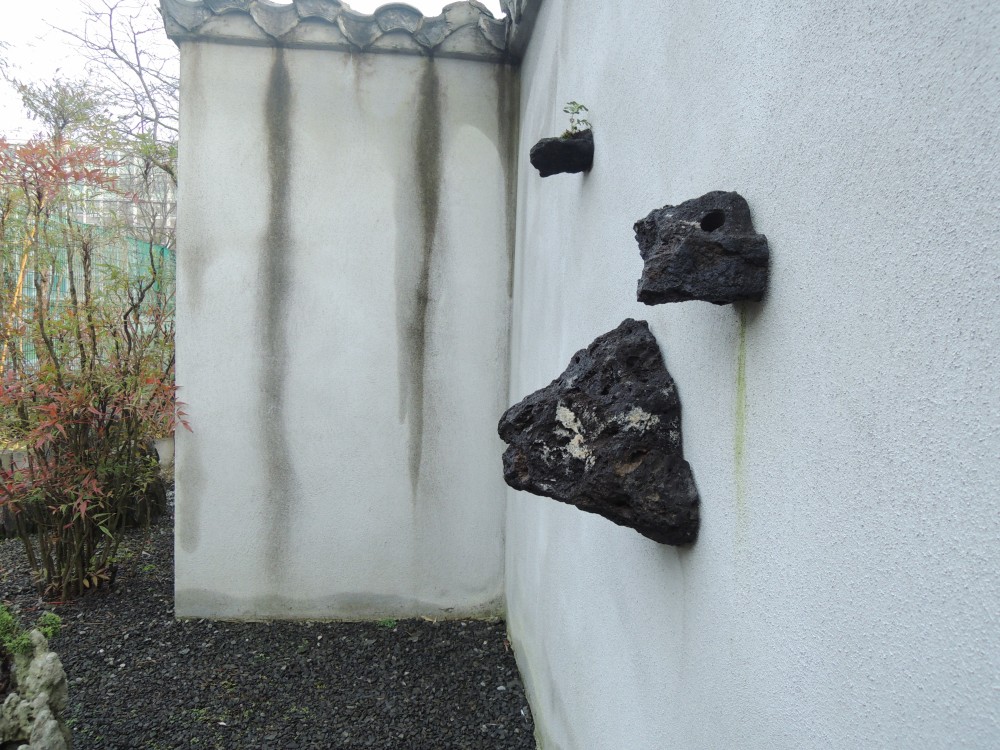 PROBIOTICS FOR PUBLIC SPACE (2016) In the Chinese "penjing" garden at VU Hortus Botanicus I installed a permanent installation consisting of three wall-mounted pieces of congealed lava. The installation invites the colonisation of micro-organisms, fungi and plants, functioning as probiotics for public space.

IJDOORN BIRD BLIND (2012 — 2014) Thanks to my membership of the Amsterdam bird club I received the commission to design a bird blind in polder IJdoorn, a wetland managed by Vereniging Natuurmonumenten just north of Amsterdam. My main inspiration was the traditional Japanese ceremonial tori-i gate, which denotes the border between sacred and profane realms. The blind consists of a clay mound, prefab concrete slabs, galvanised steel footings, and a timber frame and bench out of chestnut, oak and tropical hardwood, fastened with steel bolts. Carpentry by Jorrit Vijn, photograph by Elmer van der Marel. 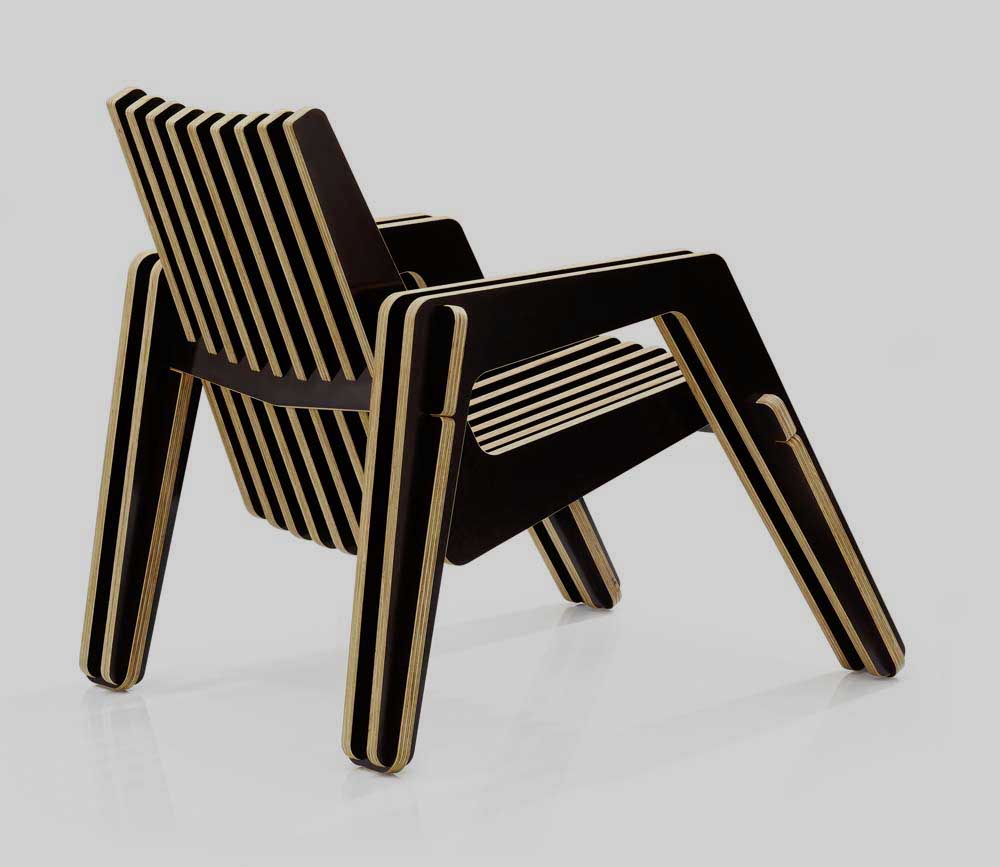 JIGSAW CHAIR (2007 — 2012) A plywood chair assembled from cnc-routed jigsaw pieces, without the use of glue or screws. Underlying the design is the notion that physical reality is essentially more field-like than atomistic. CHAIN LINK (2006) A modular and versatile furniture piece out of recycled cardboard, mdf and iron clamping levers. Frank Gehry's "Wiggle Chair" was an important influence when I developed a series of furniture prototypes in these early years.

Silvan Laan was born in 1978 in Zandvoort, a seaside town in the Netherlands. From a young age he was painfully aware of the impact of pervasive urbanization on the coastal landscape. The North Sea, incapable of ever being completely tamed, represented for him a stronghold of the sublime. Silvan received artistic training at Gerrit Rietveld Academie (BDes) and Sandberg Instituut (MA), Amsterdam. His work is transdisciplinary, aimed at the integration of opposites, coincidentia oppositorum. Also a keen birdwatcher, Silvan oscillates between an analytical and a mystical attitude to nature. He lives in Tennessee with his wife and daughter.